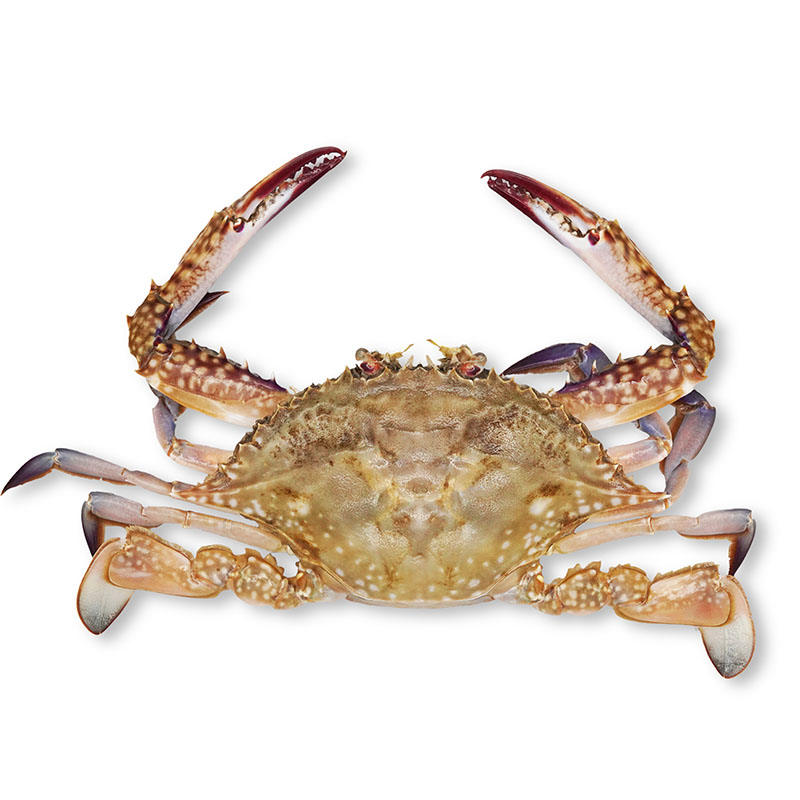 blue swimming crab, Portunus trituberculatus, commonly known as the swimming crab, is widely distributed in the coastal waters of Korea, Japan, China, and southeast Asia. This species inhabits estuaries and coastal waters, which belong to typical euryhaline crab species. In China, it is a major edible crab species and one of the most important fishery resources and the production has now reached 92,907 tons2011. At present, Commercial crab farming largely depended on wild seed stock and the commercial characteristics (growth rate, flesh quality and disease resistance) of the cultured stocks have also declined after many years of culturing, and wild populations of Portunus trituberculatus have dramatically declined for the last decades due to over-exploitation and the deterioration of environmental conditions in China.South Korea's blue crab or horse crab, is the most widely fished species of crab in the world. Indic and West Pacific Oceans: Southeast and East Asia (from Japan, Korea, China and Formosa and the Bay of Bengala), to the West, North and East of Australia.Habiting sandy and sand-muddydepths in shallow waters to 50 m depth.It is found off the coasts of East Asia.Caugth mainly by trawling. It is an important commercial species in Japan, where it is a common edible crab, and it is collected in large numbers in some areas.

The total catch reported for this species to FAO for 1999 was 284 851 t. The countries with the largest catches were China (270 280 t) and Korea, Republic of (11 819 t).blue swimming crab is the world's most heavily fished crab species, with over 300,000 tonnes being caught annually, 98% of it off the coast of China.This is because it is considered highly nutritious, especially in regard to crab cream (roe). The carapace may reach 15 centimetres (5.9 in) wide, and 7 cm (2.8 in) from front to back. Carapace rough to granulose with regions discernible. Front with 3 acutely triangular teeth with the central projected slightly forwards of the lateral ones; 9 teeeth on each anterolateral margin, the most external one much larger than the preceding. Chelipeds elongate: larger chelae with conical tooth at the base of fingers; 4 spines on the inner margin of the merus. Legs laterally flattened to variyng degrees, last 2 segments of last pair paddle-like. Carapace colour dull green to brown. Carapace transversely oval, surface granulated and marked with 3 protuberances, one on the mesogastric region, two on the cardiac region. A granulated line in the protogastric and another in the epibranchial region. Front with two acute teeth between the innerorbital teeth, the first a little smaller than the second. Anterolateral margin armed with 9 pointed teeth including lateral epibranchial spine. Fingers about as the long as manus, inner margins armed with numerous obtuse teeth of various sizes. Last pair of ambulatory legs paddle-shaped, merus and carpus broadened but short.